Egypt 'Will Not Turn Its Back' on US 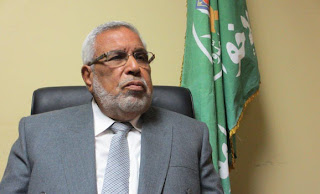 Deputy Supreme Guide of the Muslim Brotherhood Rashad al-Bayoumi stressed that under President Mohammed Morsi, Egypt will not turn its back on the United States; however, at the same time, it wants to deal with the United States based on a mutual relationship, far removed from the policy of "leader and subordinate" that prevailed under the previous regime.

Al-Monitor:  The Israeli flag is still waving in Cairo and the Camp David Accords have gone untouched. How can this be reconciled with your traditional position of opposition to Israel? Is this a cause of concern for you, and has it not led to a decline in your popularity among your support base?
Bayoumi:  We must differentiate between sincere feelings and emotions and political behavior and facts on the ground, which demand more wisdom and patience. We in the Muslim Brotherhood reject the Camp David Accords, and have never changed our position on this. It is an agreement that subjugates Egypt to Israel, and requires that we submit to the latter's conditions.
This was proven when it was revealed that Egypt was exporting gas to Israel for below-market prices and Egypt was prevented from arming its soldiers in the Sinai Peninsula.
However, we are convinced that the agreement is governed by international laws and political considerations. Thus, we in the Muslim Brotherhood cannot cancel it with the single stroke of a pen. This, however, does not mean that we are unable to conduct political amendments from time to time whenever they are in the interest of Egypt. Yet, this requires that we wait until the election of a new parliament, because parliament is the final authority capable of undertaking these amendments we are calling for.


Al-Monitor:  President Morsi's position has fluctuated throughout the Syrian crisis. At times, he has expressed his support for the uprising, while at other times he has coordinated with Iran and Russia to find a political solution. This has provoked criticism from the Syrian Muslim Brotherhood. Why has Egypt maintained this middle position, and what role can you play in finding a solution to the Syrian crisis?
Bayoumi:  I won't hide the fact that I've recently met with a group from the Syrian Muslim Brotherhood and explained to them that Egypt's position on the need for President Bashar al-Assad to step down has not changed. This, however, requires that we make serious efforts [to coordinate] with supporters of the regime in Iran and Russia to stop the bloodshed there. The bloody scene in the country is no longer bearable, and there is no visible end in sight to the tunnel of massacres that are currently taking place.
Furthermore, no one — including us in the Muslim Brotherhood — expected that the Syrian revolution would continue for all this time. While the Tunisian and Egyptian revolutions lasted a few weeks, and the Libyan revolution lasted a few months, the Syrian crisis has worsened in a dreadful way that exceeded all estimates. In particular, there has been growing sectarian strife and ethnic divisions.
Again, I can assure you — just as I assured our Syrian brothers — President Morsi's position hasn't changed. [This position] starts with Assad stepping down, along with efforts to mitigate the people's suffering.


Al-Monitor:  The Muslim Brotherhood in Egypt has strong ties with Qatar and Iran, and maintains peace with Israel. Does this mean that Egypt believes in maintaining friendly relations with all parties in order to be a regional player that can influence the stability of the Middle East? How do you envision its role in this troubled region?
Bayoumi:  It's important that everyone knows that Egypt is not a toy in anyone's hands, and Egypt doesn't seek to dominate anyone. Therefore, our relationship with Qatar is based on Egypt's appreciation for Doha's noble position and commendable support. [Qatar] stood beside the Egyptian people during the popular revolution, with that having consequences on reciprocal policies between the two countries.
As for Israel, we don't have relations with it, with the exception of the Camp David Accords. We respect [Camp David] because it is an international agreement, without striving to develop this relationship.
As for Iran, I invite those who criticize our relationship with Tehran to go to Saudi Arabia and see the number of Iranian pilgrims who visit every year. Also, there are seven daily flights between the United Arab Emirates and Iran. I lived [in the UAE] for five years and Dubai, to me, seems like Tehran, given the large number of Iranians there.
Our relations with Iran are normal political relations. I see no justification for the fears that emerge from time to time about the spread of Shiism in Egypt, because the Egyptian people are aware of this issue.  Click for Full interview
at May 18, 2013