Spreading the Brotherhood Through Water Bottle 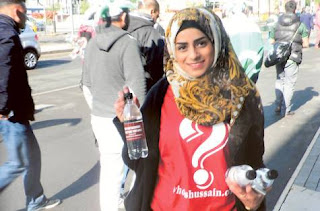 Birmingham: One often goes to an India-Pakistan match expecting aggressive behaviour from supporters of both teams.
The animosity between the two countries is well known as both countries have fought battles very often. But it was a pleasant feeling at Edgbaston, when, as I got out of my taxi, I was offered a bottle of water by a group of ladies with the message “treat your neighbours as if they were your family”.
These are words from Hussain ibn Ali who lived in 620 AD and served as a role model for people promoting compassion and generosity. The message urges everyone to visit the website www.whoishussain.org.
An Indian fan, who was being given a bottle, was heard asking a lady: Is this Indian water or Pakistan water? To which the lady replied: “It is a bottle of water from people who want peace in this world and wishes everyone lives as a family and not enemies.”
Flags and caps of both the nations were sold separately. Interestingly, a Pakistani was seen selling Indian flags. He was wearing a Pakistan cap to express his support. When asked why he was selling Indian flags, he said: “My brother is selling for the Pakistan fans, and for us it does not matter who buys it as long as we are able to meet our fans’ demands,” he said.
As I was walking towards the stadium entrance, I could hear silent whispers: “Want a ticket for 300?” Incidentally, despite the match being of mere statistical importance, tickets were still being sold by touts since the majority of matches were sold out within three hours of release last month.
The atmosphere outside was so electrifying that at the media gate a volunteer was heard asking Sami Ul Hassan, the International Cricket Council’s Media and Communications Manager: “Why don’t you organise an India-Pakistan match every year here. It feels so good.”
When I entered the stadium there was bright sunlight, and when I remarked it was a wonderful day, a volunteer warned: “Please don’t trust the English weather.” This volunteer who hails from Hyderabad in India, has been living in England for the last 14 years.
“I was really surprised when we had such bright sunshine for the England-Australia match here. For a while I wondered whether I am really in England,” he added.
Inside the stadium the crowd kept chanting the names of their country loudly right from the start. In the press box, Indian and Pakistan reporters were given front rows and neutral country reporters like me and those from Sri Lanka and England occupied the back row of the packed press box. (Story Source)
at June 18, 2013