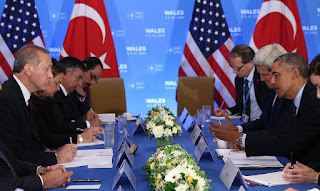 New evidence has emerged that the Turkish government under President Erdogan is covertly providing direct military, financial and logistical support to ISIS, even while claiming to fight the terror network.

The evidence comes in the form of testimony from an ISIS terrorist captured by Kurdish Peshmerga fighters, widely recognised as the most effective force confronting ISIS on the ground.

The testimony has been reported by two Kurdish news agencies, the Syrian-Kurdish Harwar News Agency (ANHA) based in Rojava, and the Turkish-Kurdish Ajansa Nûçeyan a Firatê (Firat News Agency or ANF News). The latter’s head office is based in Amsterdam.

Websites of both news agencies are blocked in Turkey.

Interviews with the ISIS fighter, captured by the Kurdish People’s Protection Units (YPG), reveal that Turkish military and security forces are facilitating ISIS operations within Syria, as well as ISIS terrorist attacks inside Turkey.

The new testimony corroborates similar claims made by other former and active ISIS members, as well as Western and Middle East intelligence sources.

Yet Turkey is a leading member of the NATO alliance. And while the Western members of NATO have gathered mounting intelligence confirming Turkey’s sponsorship of ISIS, they have refused to act on this intelligence. Read Full Story
at July 26, 2016