Why Iran stood with Erdogan 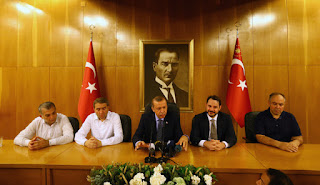 As July 15 was coming to an end in Tehran, Iranian Foreign Minister Mohammad Javad Zarif was on the phone with his Turkish counterpart Mevlut Cavusoglu, whose government was under the threat of being overthrown by a military coup. Meanwhile, Ali Shamkhani, the secretary of Iran’s Supreme National Security Council (SNSC), was on another line with security officials in Ankara. All the while, Qasem Soleimani, the commander of the Islamic Revolutionary Guard Corps’ Quds Force, Iran’s regional military arm, was busy pursuing and reviewing various scenarios that might emerge.
“It’s not a secret anymore,” an Iranian official told Al-Monitor on condition of anonymity. “Zarif, Shamkhani and Soleimani were executing higher orders. The whole establishment was too concerned. Turkey is a neighboring state. President [Recep Tayyip] Erdogan and his government are strong partners of Iran. Our nations enjoy strong brotherly ties, so it’s the least we can do to show solidarity and try to offer any help they might need in such critical times.”

Within hours after the coup attempt began late July 15, the SNSC convened to discuss developments in Turkey. Following the meeting, which was chaired by President Hassan Rouhani, Shamkhani publicly condemned the coup attempt, telling local media outlets, “We support Turkey's legal government and oppose any type of coup — either [initiated] domestically or supported by foreign sides.” Shamkhani said, “What determined the fate of developments in Turkey were the will and presence of the [Turkish] nation and the vigilance of political parties, whose contribution thwarted this coup. Shamkhani concluded, “Our stance is not exclusive to Turkey either. We have pursued the same stance in Syria too. Our position toward all regional countries is that we always prefer people's votes [to decide governments] rather than tribal, sectarian and hereditary governments, and this means democracy." Real Full
at July 26, 2016