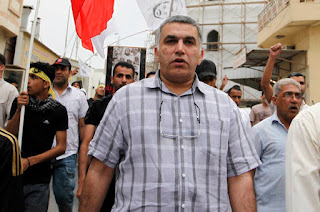 A prominent human rights activist who already faced up to 15 years in prison for Twitter posts has now been hit with another charge after writing publicly about his Kafkaesque case.

The Gulf monarchy Bahrain, a close U.S. ally, “is a country that has subjected its people to imprisonment, torture and even death for daring to desire democracy,” Rajab wrote. “No one has been properly held to account for systematic abuses that have affected thousands.” Full Story
at September 11, 2016