What is GHADEER e KHUM 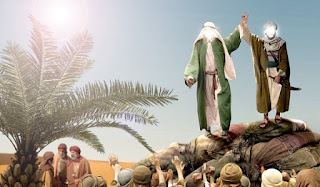 A huge caravan of nearly one hundred thousand Muslims alongwith the Prophet (S.A) and his Ahlul Bayt was returning to Medina after the "Hajjatul Widaa."
When they reached Ghadeer-ul-Khum a place between Madinah and Makkah the Holy Prophet (S.A) ordered a hält to the marching Caravan called back those who had gone ahead and waited for those who we're coming behind.

He had received the following verse from Allah:
"O Our Messenger Delivered what has been sent down unto you from your Lord and it you do not then (it will be as if ) you have Not delivered His Message at all and surely Allah will protect you from (the mischief )of men. (Holy Quran 5:67)

A tall pulpit of the "Kajawas" (seat used for sitting on the back of the camel) was put up.
The Holy Prophet (S.A) mounted the pulpit and delivered a long sermon recounting his Service towards the fulfilment of his mission as the Messenger of Allah (S.A).
He asked the audience if he had conveyed to them the commands of Allah, enumerating them one after another. The huge gathering said "Yes" in one voice.
Then he said:
"Do I wied authority .over your souls more than you do?"

"Certainly it is so O Messenger of Allah ". they said in one voice.
He asked Maula Ali to come up and said:
"O men and women! Allah is my Maula (Lord Master) I am the Maula (Lord Master) of the believers. I exercise authority over their souls more than they do and whomsoever I am the Maula Ali is his Maula. O Allah! Be Thou a friend of him who is friend of Ali,
be Thou an enemy of him who is an enemy of Ali.
Help him who helps him, forsake him who forsakes Ali."

At the end of this declaration, the following verse was revealed,
"This day I have perfected for you, your religion and have completed my favour on you, and have chosen for you Islam (to be) the Religion. . (Holy Quran 5:3)
Then the Holy Prophet (S.A) commanded everyone to pay allegiance to Mawla Ali (A.S) as "Ameerul Momineen " a title used by the messenger of Allah for the first time.
According to Imam Ja'fer Sadiq (A.S) the day of Ghadeer is a day of rejoicing for all Muslims an addition to Eid ul Fitr and Eid ul Adh'aa
Imam Ali bin Moosa Ar Riza (A.S):
It is highly rewarding to be in Najaf Ashraf today for performing the Ziarat of Imam Ali ibne Abi Talib (A.S).


Give today as much as you can in the name of Allah to the less fortunate because the day of Ghadeer is particularly specified for helping deserving and needy people.