Pope apologizes on behalf of Catholics who use prostitutes 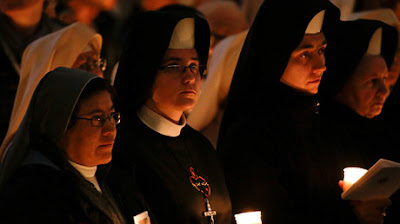 Pope Francis has asked society for forgiveness on behalf of Catholic men who exploit prostitutes, which he branded as “torture,” “slavery” and a “crime against humanity” that stems from a “sick mentality.”

The pope made the comments during an open question-and-answer session in Rome. Blessing Okoedion, a Nigerian woman who was forced into becoming a prostitute on the streets of Italy, told the pope that many ‘clients’ of prostitutes in Rome were Catholic.

"I ask myself and I ask you, is it possible for a Church that is still too male chauvinist to be able to question itself truthfully about this high demand by clients?" she said.
Francis agreed it was likely that 90 percent of Italian men who seek prostitutes are Catholics and said he would like to “ask forgiveness” from exploited women and society in general for “this criminal act.”

“I think of the disgust these young women must feel when these men make them do anything… I ask for forgiveness for all the Catholics who commit this criminal act,” said Francis. “It’s slavery.”

The pontiff said he believes that sexual exploitation of women stems from a “sick mentality” in people, and called it a “crime against humanity.” He also noted that “there is no feminism that has been able to take this out of the unconsciousness” in societal thought.

“It is a sickness of humanity, a sickness of looking at society in a certain way, a crime against humanity...If a young person has this custom, he should drop it,” the pope said, referring to paying for sex.